Butternut squash is a delicious jigsaw puzzle that, once cracked, unlocks an ochre flesh of buttery nutrition.

Make it the star in a production of soup that features a strong supporting cast of mung beans and kale.

The result is a flavorful pot of bubbly performance that is well-deserving of a standing ovation (in the form of getting  off the couch for a second bowl). 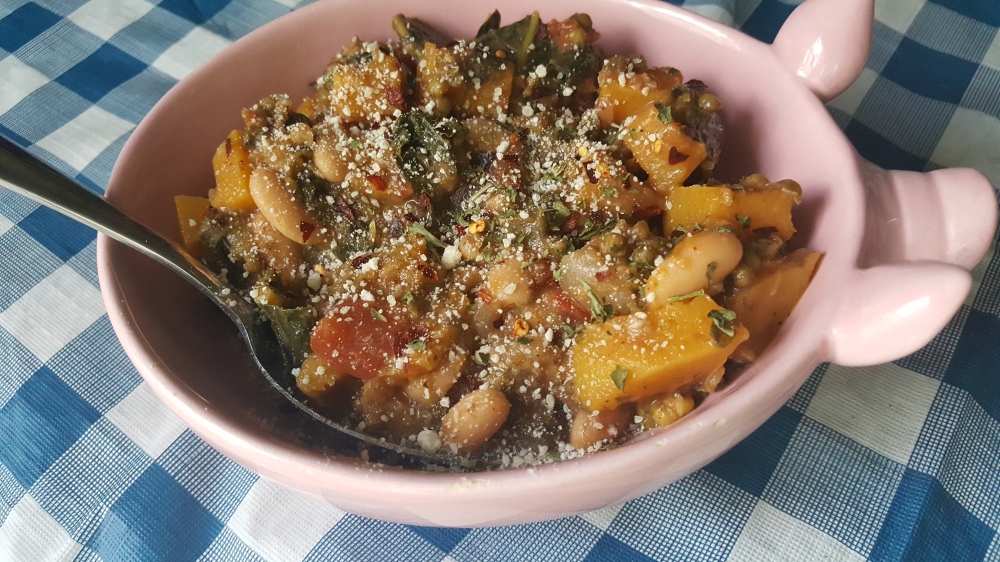 Preheat oven to 400°F
Use magic wand to transform whole butternut squash to perfect peeled and diced cubes
If magic wand is on the fritz, take manual approach
Using a sharp knife, slice the top and bottom off the squash for optimal stability
Place the squash on its side and cut it in half to separate the dense top from the hollow bottom
Stand each section up and hold the squash stable while using the knife to peel down the sides
One peeled, cut the hollow bottom half in half vertically and scoop out the seeds
Proceed to dice each half and then place on an olive oiled baking sheet
Sprinkle with salt, pepper, (1-2  tsp.) dried sage, and a touch more olive oil before tossing all together
Place in the oven and roast for 25-30 minutes, checking at about 10 minute intervals and flipping the pieces with a spatula
When complete, remove and set pans of butternut squash to the side

In a large pot conducive for massive amounts of soup, heat the coconut oil on high
Toss in the diced peppers and onions, enjoying that satisfying sizzle sound and lowering to medium-high heat
Allow to sizzle about five minutes, then toss in the garlic and cook for another minute or two
Add the diced tomatoes and season with 2-3 tsp. salt, 1-2 tsp. pepper, 1-2 tsp. sage and 2 tsp. paprika, 2 tsp. red pepper flakes (these are general measurements, but personal preference should come into play, more seasoning can and will be added later)
Fill the tomato can with water and add to the pot (repeat this step twice), then pour in the veggie broth
Cover and bring to a boil
Once the soup is boiling, lower to low-medium heat and stir in the mung beans
Cook a minimum of 45 minutes (though longer is totally acceptable)
Taste the broth and add more salt and pepper as needed
Add the beans and simmer 15 minutes
Stir in the kale and spinach, allowing the leaves to wilt into the soup 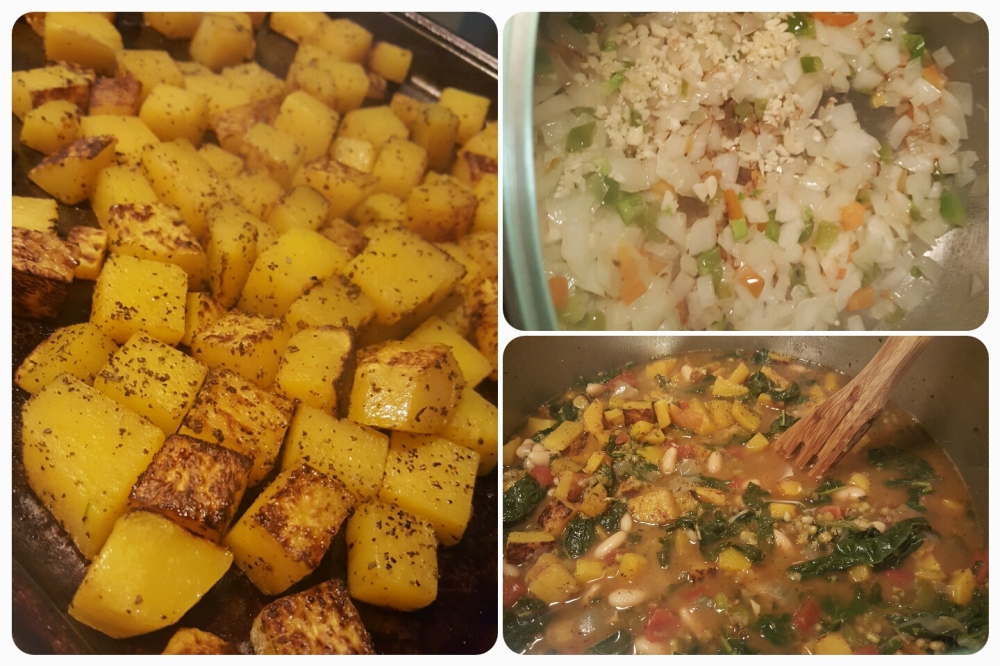 This might seem like an abundance of steps included in a meal that takes more than 30 minutes to prepare.

The beauty of crafting soup is that you are the director telling the ingredients where to go, but it is up to the ingredients to learn their roles and ultimately play their part with you simply nudging them along in the right direction. There is no need to breathe down the neck of the kale or make the onions cry for underperforming. The show will come together organically as the actors get to know each other and play off of each other.

This quality combines with large quantity which ensures that once the soup is finished cooking, the performance can be enjoyed fresh and then returned to again for a second or third viewing later in the week, even shared with friends. Take a risk and reinvent later in the week by introducing broccoli as a guest star during a bout of reheating.

Ultimately its run on Broadway (if that is what you like to call your stove top) will end and the show must come to a close. Then you know it is time to get creative and come up with another edible performance that will nourish you and others, mind, body, and soul.