In a large soup pot or cast iron Dutch oven, heat 1-2 tbs. olive oil on medium-high heat
Add the red bell pepper to the pot and allow to sauté for a couple of minutes before adding in the onion
Moving them around a bit, allow these veggies to cook a few minutes (5-7 perhaps) til they get a little color on them
Toss in the garlic and cook for another minute or two, this is a good time to go ahead and open up the canned tomatoes
Pour in the tomatoes
Season with about 2 tsp. salt, 1 tsp. pepper, oregano, basil, etc. and the other seasonings*

Stir in the seasonings, lower the heat to that sweet spot between low and medium-low, place the lid slightly askew on top and allow to simmer for at least an hour if possible*
Stir occasionally

After at least an hour, remove the lid and taste for seasoning
If the salt and pepper level satisfying, leave it alone, but if it is lacking, sprinkle in a tad more
Using a handheld immersion blender, blend the soup til the chunky texture reaches a desired level of smooth
Feel free to leave it chunky though if that is your preference, or if you do not have an immersion blender, the base can be blended in a regular blender
Pour in the first cup of cream and continue blending
We used somewhere between 1 and 1 ½ cups
Add more if desired, but 2 cups is more than enough

This creamy tomato soup stands on its own soup feet, but I strongly encourage implementing some type of bready cheesy vehicle such as … Panini! 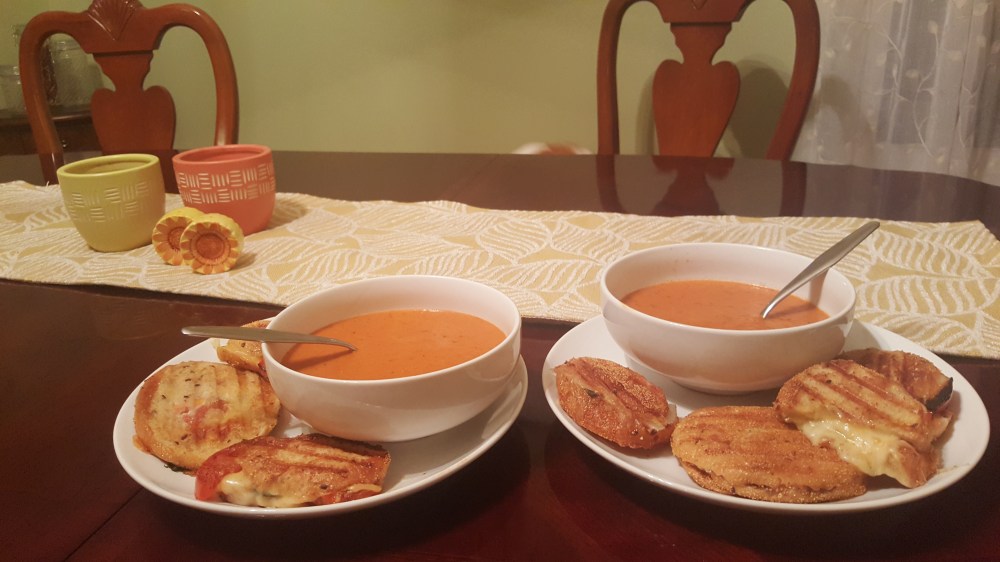 Making dinner can sometimes be a chore, but it can also sometimes be a fun and relaxed activity that can be enjoyed just as much (well ALMOST as much) as the final result of consuming the creation.

To go with this tomato soup, the bearded one and I ventured to the cheese counter and ordered about a quarter pound of four different types of cheese.

For the panini exterior, we purchased small five-grain rolls.

We started by slicing the rolls to create three pieces of bread (so two rolls yielded three sandwiches), buttering the outside, then piling on different combinations of cheeses and our favorite toppings like spinach, tomato, onions, and peppers.

Our Panini press got quite the workout and, frankly, we had a blast.

*Seasonings Note: Please interpret the amount of salt and pepper, as well as the specific seasonings, more as guidelines or suggestions and less like rules. No smoked paprika? Just use regular paprika or none at all. No fresh oregano? Just use dried. I picked a couple springs of oregano and tore the leaves directly into the soup, but a couple tsp. of dried oregano would also work. Same with the basil. When I add salt, I don’t actually measure a tsp. I usually just gently sprinkle across the surface of what is being cooked with a very light hand with the intention of tasting later in the process and adding more if needed.

*Possible Note: A minimum of 30 minutes will probably suffice. BUT, longer helps develop the flavors PLUS you do not need to stand in the kitchen and stare at the pot for an hour. Use this time to take a shower, fold some clothes, relax and watch a show, drink a beer, play with the pup, read a boo… the combination of possibilities are limited only by your imagination. You can also use part of this time to prep the ingredients for the mini personal Panini to go alongside this soup!